Miscommunication
A co-worker got a pen stuck inside our printer. He started to try and remove the pen, but I told him we don't have time for that now, just put a note on the printer telling folks not to use it and then report it to the Help Desk. So he grabbed a piece of paper and scribbled on it. I left before he finished the note.


*About 20 minutes later, one of my techs comes in laughing and says he was just in the lobby, saw a piece of paper on a printer and went to investigate.


*Attached is what he found. Sometimes things don't always come out the way you want them to... 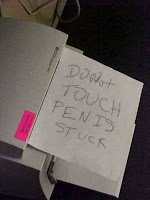 Now that you've smiled at least once, get back to work!
Posted by Spyder at Friday, February 22, 2008

Now, I would have loved to have a camera in that room to watch people read the sign - then look for the penis.

That's not funny at all. That's happened to me. I wish it would happen again.

My kingdom for a comma!

Why did I know I would get a rise out of you fellas? LOL

At least it wasn't "penis missing" !

Damn that's one field service I am glad I didn't get the call for...

Dan called me at work to ask me if this was a coworker that he knows. I didn't even recognize his voice since he's been sick.

But the penis safe inside, right?

I am soo not getting there with you, young lady!

(but I'd say it depends with whom)

Start as you mean to go on

Search Engine Optimization and SEO Tools
Who links to me?